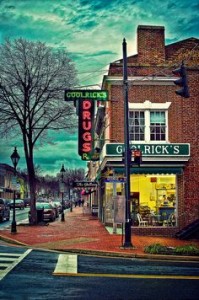 The city of Fredericksburg has 28,000 people and is the fastest growing municipality in the state of Virginia, and it is the hub of a region has over 300,000 people, which is also the fastest growing the state.  Nevertheless, many of the city’s residents, especially its downtown residents, insist on thinking of it as a small town.  Residents of the old part of the city might possibly be forgiven for mistaking it for a small town; it was a small town for most of its history, and the built environment and residential distribution of the downtown reflect that history.  Fredericksburg can often feel like a small town, even if the diminutive old city is really the hub of a large and growing region.  The scale of the buildings and the patterns of land usage are village-like, and the relatively minuscule downtown population (compared to the whole area) and its relative isolation from the newer regions of sprawl beyond the interstate make the social experience of downtown Fredericksburg feel decidedly intimate in a small-town way.  I get that the “small town character” of Fredericksburg is a large part of its appeal, but the overzealous commitment of downtown’s residents to preserving that “small town character” contributes significantly to Fredericksburg’s extreme income inequality. END_OF_DOCUMENT_TOKEN_TO_BE_REPLACED

A Brief Respite From a Season of Terrible Historical Analogies 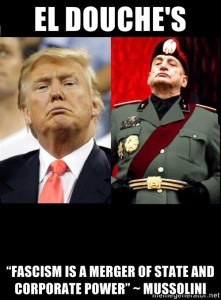 El Douche? I see what you did there…

Something about this political season has encouraged a string of blockbuster new hits at the Bad Historical Analogy Theater.  All political seasons introduce a handful of entertaining new acts, but something about the unpredictability of national political life in the Age of Trump has really lit up the marquees on the Great White Way of Facile Comparisons. The presence of multiple political dynasties, the institutional and ideological implosion of the Republican party, the campaign finance Wild West of Citizens United, and the rise of nontraditional candidates have all stumped pundits and political writers of all stripes (and abilities), and in the face of such novelty and uncertainty many of them have an unerring instinct to grasp at historical analogies to explain what we’re living through.  Most of those analogies are terrible, in that they rely on superficial similarities for their explanatory power, while papering over vast historical differences that undermine any explanation they purport to make.  And if there’s one thing this blog is against, it’s Bad Historical Analogies. END_OF_DOCUMENT_TOKEN_TO_BE_REPLACED 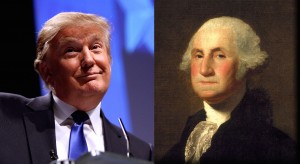 END_OF_DOCUMENT_TOKEN_TO_BE_REPLACED

Obama Agrees With Me 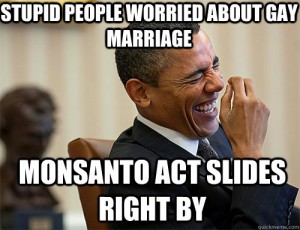 Back in October, during the catharsis after Virginia gay marriage legalization, I argued that “the political momentum for gay marriage has built so quickly because it has become a treacly feel-good issue for liberal politicians who want to deliver a win to their social-liberal base without actually challenging the mechanisms of power in this country … everybody outside of the religious right has come to support gay marriage, because it feels liberal, progressive, warm, comfortable, human, and uplifting, but it doesn’t cost money to anyone who has real political power.”  I framed the argument in material (and probably also cynical) terms: gay marriage is part of a larger strategy to force the broader American public into a kind of D.I.Y. social welfare, in which the government ducks its social responsibilities in the name of “family.”  Well, it turns out Barak Obama agrees with me, sort of.