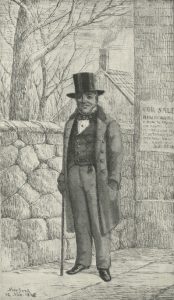 He preferred to bankroll Henry Clay rather than take a shot at the big chair himself. Let’s hope Trump is as successful as Clay was. (courtesy of the Museum of the City of New York)

I have been fascinated by the debates raging about Donald Trump’s refusal to release his tax returns, and the related debates about the size of his fortune and the source of his wealth.  The consensus seems to be that he is refusing to release financial information because it will show that he isn’t nearly as rich as he says he is.  While it’s absolutely entertaining to watch Trump writhe as the gossamer threads of his “success” are blown away by gale-force media scrutiny, I was particularly struck by John Cassidy’s reporting on the specific sources of Trump’s wealth in The New Yorker.   It turns out that (unlike Romney in 2012) much to Trump’s wealth is derived from old-fashioned, boring, concrete real estate, rather than modern, sexy, ephemeral market capitalizations.  As Cassidy points out, “Trump certainly owns some very valuable properties, most of which are in New York City.”  It struck me that Trump’s fortune comes from what is perhaps the second-oldest form of American fortune-building: owning a piece of Manhattan Island.  While it’s not quite as old and venerable of an American wealth-building tradition as owning enslaved people and forcing them to grow tobacco for export, it’s pretty close.  It places Trump’s fortune in a long and “illustrious” tradition of great American fortunes, along with the Beekmans, the Schermerhorns, the Astors, and many others.  Those previous owners of bits and pieces of Manhattan Island inspired Edith Wharton’s The Age of Innocence; too bad this one seems to be operating as The Destroyer of American Political Innocence.