The “Scorecard” Bites Back 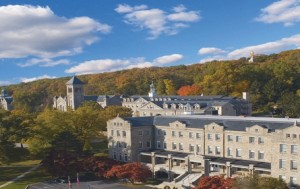 It’s hard to live in a Citty upon a Hill.

Like much of academia I have been riveted over the past 24 hours by the saga unfolding at Mount St. Mary’s in Maryland. (Imagine me, late last night, trying to peer around the paywall at the Frederick News-Post while feeding a baby.)  Briefly, from what I can gather from news reports like this, this, this, and this, the story begins with the hiring in 2014 of Simon Newman, “an executive with a strong background in private equity, strategy consulting, and operations,” as president of the well-regarded Catholic liberal arts college.  Although he had no experience in higher education, Newman was hired because  the search committee was looking for “a new leader with fundraising, strategic planning and fiscal leadership skills.”  Readers who are immersed in the culture of academia can probably already tell exactly where this is headed.

Last fall, Newman apparently unveiled an “innovative” (I use that term sarcastically) student retention strategy: identify 20-25 weak first-years early in the academic year and encourage them to drop out by September 25th, about a month into the semester.  If the students dropped out that early, before the cutoff date for reporting the university’s enrollment numbers to the federal government, then they wouldn’t be counted against the institution’s retention rate.  The federal government keeps close track of how many college students return for a second semester and especially a second year of schooling at the same institution, and this statistic is known as the “retention rate.”  The federal government likes to see (and colleges like to brag about) a high retention rate, because it shows that they are actually successfully educating the students they admit.  Persuading weak students who might drop out at some point during their first year to do so before the reporting deadline would prevent their departures from eroding the university’s all-important retention rate.

This deeply cruel and cynical strategy naturally met with outrage when it was first reported by the student paper, The Mountain Echo.  (Awesome job, student journalists!)  Newman did not help his case when, in a meeting with faculty skeptical about his policy, he reportedly said, “This is hard for you because you think of the students as cuddly bunnies, but you can’t. You just have to drown the bunnies … put a Glock to their heads.”  I mean, come on.  This quotation speaks for itself.  It dresses a cruel policy in the cruelest possible language; remember, this policy is effectively giving up on students’ college educations after they’ve been in school for a month, and it is being described with a bunny execution metaphor.  And the icing on the cake is that when it broke nationally the president fired two faculty members, one with tenure, and one the advisor of the student newspaper, and is reported hunting for a third so that he can be fired, too. The provost has also been demoted back to the faculty, and an interim provost has been brought in, although it is not totally clear to me how directly related that change is to the new retention policy.

You can see why this story has captured the undivided attention of the higher ed community.  And I’ve seen lot of social media commentary, all of it smart and relevant.  Many have pointed out that this story illustrates the dangers inherent in the current fad for hiring business executives to run institutions of higher education.  They don’t understand such institutions and they don’t share educators’ values, and as a result they will inevitably kill what they have supposedly been brought in to save.  Newman, a hedge fund and private equity guy with little respect for students or tenure, is the perfect villain for this narrative.  Similarly, many have pointed to this tale as a parable of the importance of fighting back against the erosion of faculty self-governance.  If we want our institutions to embody the values of educators, like helping struggling students to learn and embracing free speech and inquiry, then we have to empower the educators within the institutions.  Newman seems almost like a parody in this regard, as well.

I want to draw a different lesson from this saga, one that I haven’t seen discussed during today’s flurry.  The horrors on the Mount demonstrate the very real dangers of allowing higher ed to be submitted to the same kind of simplistic statistical measurement that has gutted so much of what is valuable about public education in this country.  Newman cared so deeply about the retention rate because the Obama administration has made it clear that they care deeply about the retention rate, especially when issuing their “scorecards” that are designed to make institutions comparable to each other.  These “scorecards” collect simple statistics about colleges and universities, statistics that are easy to generate, easy to understand, and easy to digest.  These “scorecards” are supposed to make institutions compete against each other, and in the process improve.  If this idea sounds familiar, it’s exactly the logic behind Bush’s disastrous No Child Left Behind policy, with its reliance on standardized tests to rank public schools into hierarchies of quality that reward the high achievers and punish the low achievers.  The Obama administration’s language is less malthusian than the Bush administration’s, but the logic is the same.

But as we have seen with all the No Child Left Behind cheating scandals, the problem with using simplistic, one-dimensional metrics to compare educational institutions is that it creates an almost overwhelming incentive to game the system.  Making an institution’s future ride on a single number (or a small group of numbers) makes it incredibly tempting to focus on changing the numbers rather than changing the institution.  And when, at an institution like the Mount, the president’s value system is rooted in the ultracompetitive and amoral world of high finance rather than in higher education, there are no ethical levees left standing to prevent such cheating from flooding the system.  Because, at root, that’s what Newman’s retention policy was: cheating the students, gaming the system, and rigging the numbers to make the institution look better on the Obama administration’s “scorecard.”  When you reduce the irreducibly complex process that is education to a handful of numbers and a tired sports metaphor, the Mount St. Mary’s debacle is the inevitable outcome.