The Politics of Trigger Warnings 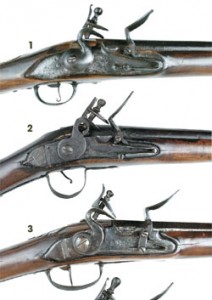 Wait, not this kind of trigger? asks the early Americanist.

Up until now, I’ve avoided weighing in on the debate about “trigger warnings” that has been raging across the humanities.  The debate, as I understand it, is over whether or not professors and other pedagogues are responsible for warning students and other audience members about sensitive or controversial material that might elicit a strong emotional reaction or be traumatically “triggering.”  The paradigm here is therapeutic, and the analogy is PTSD.  The debate turns around who is silencing whom (see here for example): does traumatic material silence the traumatized?  Or do trigger warnings silence those who would explore difficult material?  I have stayed out of the debate so far because I’m divided on the issue myself.  I’m skeptical about catering too much to students’ emotional needs, because isn’t the point of education to be challenged? But at the same time, my training as a historian has taught me the fundamental limitations of my own ability to understand others’ experiences, so who am I to say what might be “triggering” or not?  But the whole discussion has sat uncomfortably with me over the past months.  Finally, at long last, Jack Halberstam has laid out a set of objections to trigger warnings that capture my inarticulate sense of discomfort better than I have been able to do myself.

Halberstam takes the trigger warning debate out of the realm of trauma, emotion, and mental health and puts it squarely back into the realm of politics.  In a nutshell, Halberstam points out that “a neoliberal rhetoric of individual pain obscures the violent sources of social inequity.”  But focusing in deeply, irreducibly individual emotional reactions to bad stuff in the world, we miss the political content and causes of that bad stuff and hobble our ability to organize a collective political response to it.  Bad stuff makes you feel bad, even moreso if you have been “traumatized” by that bad stuff in the past, but if we spend all our time exploring, articulating, and managing our individual emotional reactions to that bad stuff, then we’re not spending our time understanding or combatting that bad stuff in the first place.  And we’re certainly not recognizing that that bad stuff has a similar bad effect on lots of different people.  The best part of Halberstam’s piece are these sentences:

But, newer generations of queers seem only to have heard part of this story and instead of recognizing that neoliberalism precisely goes to work by psychologizing political difference, individualizing structural exclusions and mystifying political change, some recent activists seem to have equated social activism with descriptive statements about individual harm and psychic pain. Let me be clear – saying that you feel harmed by another queer person’s use of a reclaimed word like tranny and organizing against the use of that word is NOT social activism. It is censorship.

“Censorship” strikes me as a strong term, but the gist of the argument is that emotionalizing and individualizing the harms of modern capitalist society is playing into the system’s hands.  Exactly.  As historians, aren’t we supposed to be teaching students to understand the effects of larger political, social, cultural, and economic systems on the lives of individuals, teaching them to see the ways in which those systems enable and constrain peoples’ lives?  By focusing so much on the unique reactions of unique individuals, trigger warnings are directly antithetical to that goal.