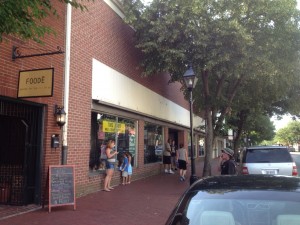 This post goes out to Fredericksburgers, history buffs, online sleuths, and students who could use a little bit of cash.  A scavenger hunt is on.  The building housing Tim’s Mart at 1010 Caroline Street in downtown Fredericksburg is for sale, and the city’s Department of Economic Development needs an old picture of the facade, dating from before 1955.  They need it so badly that they’re offering a $500 reward to anyone who can turn one up before December 31.  So it’s time to hone your digital and analog archival skills, crack open old newspapers and dusty cardboard boxes, and start looking for early twentieth century Fredericksburg streetscapes. 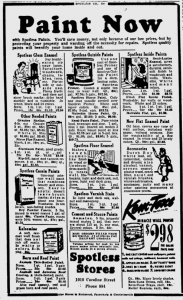 From the Fredericksburg Free Lance-Star, November 15, 1944.

A little backstory.  Tim’s Mart is a giant, rambling, musty old store that sells wigs and suits from the 1980s.  Lest you think it’s some kind vintage emporium, the suits have been there since the 1980s.  The building is huge and cavernous, dusty with creaky unused escalators.  It was home to Spotless Stores, a local paint supplier, in the 1940s, and in the 1950s it became a branch of South Boston-based Leggett’s Department Store.  Leggett’s modernized the facade in 1955, removing the windows from the second floor (and apparently ran a “Teen Charm-Modeling School” in the 1970s.  Women’s Movement? What Women’s Movement?).  Like most departments stores of its era, Leggett’s decamped for suburban Spotsylvania Mall in 1980 (and subsequently became Belk in 1997), leaving its downtown building empty.  Tim’s Mart filled the ground floor in 1985, and has remain cast in amber ever since.

The owners of Tim’s Mart put the place up for sale a year or two ago, and haven’t sold it, probably because it’s a relatively huge space for downtown Fredericksburg, and because they’re asking $1.69 million for it.  The price seems pretty fair, but it appears that no one wants to drop that kind of coin on such a large and run down building.  But the structure is old enough (circa 1920) that a developer could qualify for historic rehabilitation tax credits to restore the facade to its pre-1955 state, which would help fund returning windows to the second floor.  But in order to qualify for the tax credits, a developer needs visual evidence of what the historic facade looked like.  And apparently, there are no extant images of the old facade in the city archives, in any of the local archives or historical societies, or in the Free Lance-Star newspaper morgue. 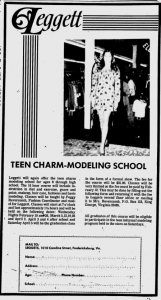 From the Fredericksburg Free Lance-Star, January 17, 1975

Hence the reward.  The city is would really like to see the building purchased and rehabbed.  That’s less likely to happen without historic rehabilitation tax credits.  The tax credits won’t happen without the photograph.  The result is a contest and reward to anyone who can turn one up.

So this post goes out to anyone who likes digging through archives, the internet, or old photo boxes in albums in central Virginia.  Mary Washington history and historic preservation students, I’m thinking of you.  I’ve provided you with a couple of leads in this post, so ready, set, go!  If you strike pay dirt, contact Karen Hedelt, the city’s Director of Economic Development and Tourism, at 540-372-1216 or khedelt@fredericksburgva.gov.

(For fun, here’s a really nice artsy photo of the window of Tim’s Mart.)