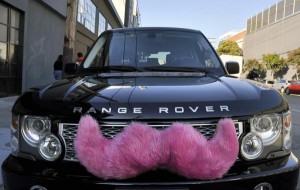 Range Rover or no, this isn’t a sign of economic health.

Although Orwell never used the term “doublespeak” (he preferred the more insidious “doublethink”), the term has become indelibly associated in the modern day with the dystopian totalitarian future of his classic novel 1984.  In its common usage, “doublespeak” refers to any language that exploits linguistic ambiguity in order to describe a negative reality in positive terms.  For most Orwellian-inspired users of the term, it generally has a political connotation. It refers to political speech that tries to mislead citizens and subjects, towards the end, as Orwell put it, of “the defence of the indefensible.”  But I think the most skillful current users of doublespeak are the corporate promotors and wild-eyed futurists of Silicon Valley, along with their natural allies, the armies of TED talk speakers that have infested our public discourse.  The evangelists of the new digital age have perfect the art of packaging proletarianization as progress, and making us thank them for it.

I can find no better example of the doublespeak of technoevangelism than this recent article in New York magazine about the “sharing economy.”  The “sharing economy” refers to services like AirBNB, Lyft, and Feastly, that allow people to rent out their spare bedrooms, their cars, and their culinary skills for a little bit of extra cash.  The “sharing economy” is one of Silicon Valley’s latest ballyhooed “disruptive innovations.”  The idea of renting out parts of your life always made me uncomfortable, but I couldn’t really put my finger on why until a year ago, when my old college roommate and current union organizer Corey pointed out that the “disruptive innovation” of car sharing was endangering the otherwise relatively stable jobs of taxi drivers, and oh, was operating without any kind of safety regulation or insurance oversight, as well.  His insight showed me just how perfectly terms like “sharing economy” and “disruptive innovation” fit the definition of doublespeak.  “Sharing” is a nice way to describe dividing limited resources amongst needy individuals.  “Disruptive” has a really different connotation when it’s your life being disrupted.  And “innovations” aren’t always good.  And both terms seem to be generally used in the service of “efficiency,” which is another way of describing making do with less.  In each case, it’s classic doublespeak.  These phrases sound great in the mouths of 30-year-old CEOs, but they describe an ugly reality in which technology in enabling the squeezing of every last drop of value out of people’s lives.

The NY Mag piece makes the point better than I do.  Author Kevin Roose argues that the “sharing economy” works not because technology enables trust, as the technoevangelists would have it, but because, not to put too fine a point on it, people are broke and desperate for any income stream they can find, however meager.  He draws a connection between declines in full-time employment, as well as declining incomes for middling and poorer Americans, and the rise of alternative moneymaking schemes online.  AirBNB, Lyft, Feastly, and all their myriad imitators have thrived since the Great Recession not because of the brilliance of their business models, but because of the desperation of their customers, both the providers and the consumers.  In other words, the rise of the “sharing economy” is a sign of economic sickness, not economic health.  Not that you’d know that by listening to the rhetoric of Silicon Valley.  And that, my friends, is doublespeak.