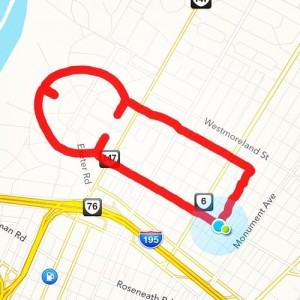 Olmstead would have disapproved of the symmetry.

This tumblr has been making the social media rounds among my running friends, and it’s easy to see why, because it’s brilliant.  A copywriter named Claire Wycokoff has been using the run tracking feature of her Nike+ to draw (mostly crude) designs on the city maps of San Francisco and Richmond.  It’s like Etch-a-Sketch for grownups; how great is that?  And she’s hilarious.

But as a historian of 19th century landscape aesthetics, what jumped out at me immediately was how creatively Claire has used and reused the gently curving paths characteristic of post-Olmstead landscape design to, uhhh, render the male anatomy in loving detail.  Frederick Law Olmstead, the landscape architect who designed New York’s Central Park, favored the asymmetrical designs, rough edges, native plantings, and curving paths of the English pastoral style, which was itself influenced by late-18th and early-19th century discussions of “picturesque landscape” (a topic about which I have a fair amount to say).  Although neither Byrd Park nor Golden Gate Park were designed by Olmstead, they were very clearly inspired by him and squarely within the tradition of late 19th century public landscape design.

Although these parks’ curving paths were originally designed to give city dwellers the illusion of being in the countryside, it turns out they’re very useful if you’re trying to draw rounded patterns on an otherwise unforgiving city grid.  Like, say, male genitalia, instead of robots or strippers.  Claire uses these curves to draw penises in some very creative ways.  We should all be thanking Frederick Law Olmstead for making cruve-drawing in adult Etch-A-Sketch so much easier than it was in the kiddie version.