Independent Upstate Has a Name 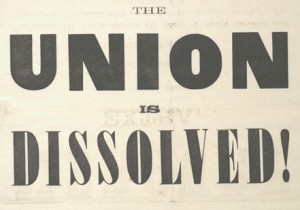 Secession movements have a rich history in New York State.  Alexander Hamilton, a politician who made no small plans, began by threatening to push for New York City’s secession from the broader state during the New York’s ratifying convention in 1787-1788, a means to undermine the power of anti-Federalist governor George Clinton.  Since then, figures ranging from Fernando Wood, colorful Confederate-sympathizing mayor during the Civil War, to Norman Mailer during an idealistic counterculture-fueled bid for the mayoralty in 1969, have pushed to pull New York City out of New York State.  More recently, pushes for secession have come from the upstate side.  In the 1990s, a state senator from western New York named Randy Kuhl began to push for upstate secession, and the cause has been taken up in the early twenty-first century by tea party and libertarian types who frame it as an appropriate response to the perceived political and economic domination of the New York metro area. 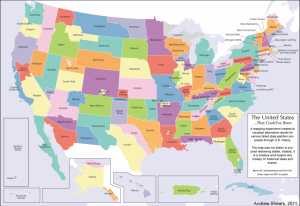 Apparently secession makes the US quite colorful.

Recently, state secession movements have been somewhat in vogue.  The famous examples include the state of Jefferson in Northern California, and the state of North Colorado in northeastern Colorado.  Indeed, in 2011, Andrew Shears, a geographer at Mansfield University, counted 124 total states if all proposed state secession movements succeeded.  Serious contemporary political commentators like Nate Cohn at the New Republic have gauged the potential effect of proposed new states on the electoral college outcomes.  (Spoiler: Obama still would have won in 2012, but it would have been considerably closer.)  But as a proud upstater, I like to think that New York jumped on state secession before it was trendy.  And the argument for splitting New York in two has a clearer … or maybe just older … political and economic rationale.  Even though they are obviously deeply intertwined, upstate and downstate have very real social, cultural, and economic differences, which reach back into the early national period.  The only time when such a partition succeeded, when Maine separated from Massachusetts in the 1820, the two territories in question were very different and also noncontiguous.  New York is obviously contiguous, but there is a clearer cultural and economic dividing line there than in other states.  I’m certainly not an advocate for secession … it would be a disaster for both parties, I think … but it’s an old argument, with a very old logic to it. 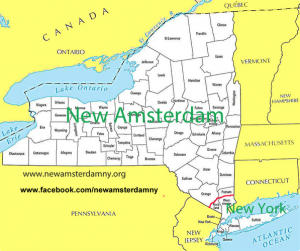 Are they proposing a wall where the red line is?

Main main question has always been, what would each new state be called?  Should upstate remain New York, should the city become Gotham?  Should each new subregion be named in unimaginatively derivative ways, like East New York and West New York?  Happily, a new group of conservative activists have answered my question. Upstate would become New Amsterdam!  Despite the historical nonsensical nature of this proposal (the city was New Amsterdam, the broader colony was New Netherlands), I applaud their attempt to name to the two states something different.  I can’t wait to tell strangers in bars that I’m from New Amsterdam, and watch their brains melt.  Or else watch them break out into They Might be Giants.