Gay Marriage Was The Easy Fight 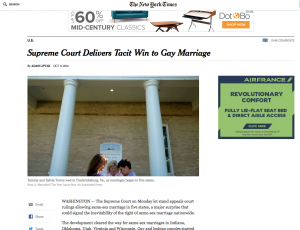 Fredericksburg’s Big Day! A local wedding made the NY Times.

Undoubtedly, the last few days has been an emotional roller coaster of excitement and triumph, from the Supreme Court’s unexpected and exciting denial of cert, to the almost immediate changes that began to appear on the landscape here in Virginia.  These changes have been undeniably meaningful and beneficial for my family, my town, the state, and the nation.  And with the more recent news coming out of the Ninth Circuit, it looks like the party is about to get bigger.  But now that we’ve had a chance for our modest, middle-of-the-semester-and-approaching-middle-age celebrations, it’s time to remember that there’s much more work to be done, work that’s both arguably more important and much harder.  Gay marriage is a good start, but it doesn’t actually truly address the structures of wealth and power in this country.

The recent success of the gay marriage movement is thrown into stark relief by the relative failure of the push for LGBTQ employment nondiscrimination (ENDA) protection.  Although some states have various laws protecting LGBTQ people from discrimination in hiring and firing, it’s frankly an embarrassing minority.  Take a look at the map of states that provide ENDA to the left, and then compare it to the most recent map of states that provide marriage equality (current as of 10/8/14) below.  It’s embarrassing how few states protect LGBTQ people on the job.  Comparing these maps shows that there are a lot of states that protect same-sex families at home, but leave queers vulnerable to antigay bigotry in the outside world.  Now that the momentum behind gay marriage has gathered more or less unstoppably, it’s time to protect people in the workplace.  After all, not all queer people will get married, and not all queer people will form families, whether due to preferences or circumstances or both.  But pretty much all queer people will need to work to put food on the table, so ENDA actually protects a much broader segment of the queer population than do marriage rights.  Which is why the difference between these maps is so depressing. 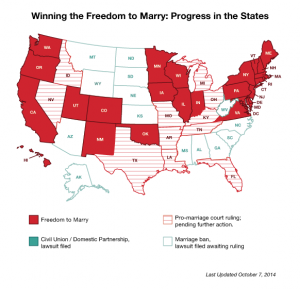 But the difference between the maps is not an accident.  ENDA has been slower to come because it’s a heavier lift for LGBTQ activists and their allies.   I have argued for a couple of years, to anyone who feeds me beer and then remains within earshot, that the political momentum for gay marriage has built so quickly because it has become a treacly feel-good issue for liberal politicians who want to deliver a win to their social-liberal base without actually challenging the mechanisms of power in this country.  (I’m looking at you, Andrew Cuomo.)  As a result, in recent years, everybody outside of the religious right has come to support gay marriage, because it feels liberal, progressive, warm, comfortable, human, and uplifting, but it doesn’t cost money to anyone who has real political power.

There’s a reason why Wall Street types side with the liberals on gay marriage and pretty much nothing else: it allows them to feel good and humane without paying any more taxes or acknowledging any greater social responsibility to care for the less fortunate.  If anything, marriage is a mechanism that allows the less fortunate to care for each other more conveniently, in the absence of any kind of broader political commitment to their welfare.  How many people do you know who’ve moved in together to save on rent, or gotten married “for the benefits?”  Exactly.  It’s DIY social welfare.  The wealthy and their political allies don’t want to be on the financial hook for paying a living wage, or subsidizing public health care, or providing reasonable public childcare and education options.  Extending marriage to whole new categories of people allows those people to better muddle through the daunting task of providing those things for themselves, without a public commitment.  Some progressivism there.

And that’s why ENDA is going to be harder to pass than gay marriage ever was.  Far from lessening the burden on the wealthy and the powerful, it subjects them to additional regulation, limits their freedom to make business decisions, and potentially costs them money.  ENDA is critically important, because its protections come at the expense of people in power.  Gay marriage was a good start, protecting gay families, legitimizing our relationships, and presenting us in the public eye as full participants in American life.  Now it’s time to turn to reforms that will actually protect queer people against the workings of power, and that fight is going to be both bloodier and more important. The wealthy powers-that-be aren’t going to be throwing us fundraisers for this one, which is how you know it’s worth fighting.