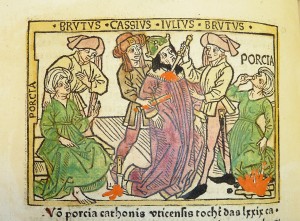 This is the March Madness that historians should be obsessing over.

Let me start by stipulating that I really like The Junto, which is “a group blog on Early American history.”  I think it makes a great contribution to the online life of early Americanists … more collaborative than solo outlets like mine or The Way of Improvement Leads Home, and less formal than Common-place.  But every year around this time I have to take a break from reading it because they give so much play to their annual “March Madness” feature.  As they described it this year, “each year we engage in a spirited tournament of voting in some category related to early American history.”  They accept nominations in the category (this year it’s journal articles) and “[t]hen, by the power of The Junto’s bracketologists, [they] put together tournament brackets, announce the brackets, and open it up for your votes.”  I think this exercise is highly problematic for two reasons, one of which is broad and general, and the other of which is narrower and more specific.

My more general objection is that I think that sports metaphors are used way too commonly in American life.  (And, at risk of engaging in a declension narrative, it seems to me that their prevalence is growing.)  And mostly, life is not very much like sports.  Sports are by definition competitive, and that competition is generally a zero-sum game.  In sports, every winner produces a loser, and that relationship is understood as necessary, organic, and proper.  Thus by their very nature, sports divide people into winners and losers, successful and unsuccessful, or podium finishers and also-rans.  They leave no room for ambiguity or messiness, for partial victories or redeeming failures, or for cooperation, collaboration, or consensus.  To my mind, the world outside of sports is much more often cooperative, collaborative, and consensual than it is competitive and dichotomous.  As a result, the application of sports metaphors to the rest of human endeavor is vastly reductive, and it represents a drastic oversimplification and sterilization of real life.  I could list examples ad infinitum, but that’s not the point of this post.  Let’s just say that Ayn Rand is what happens when this kind of dichotomous thinking runs amok.

My specific objection is that the dichotomous winners-and-losers worldview of the sports metaphor is especially inappropriate for the world of scholarly endeavor.  Scholarship is supposed to to be collaborative.  We produce work for each other, we critique and otherwise help improve each others’ work, and we build off the work done by predecessors and collaborators.  Every piece of scholarship produced stands on the shoulders of previous scholars and contemporary co-investigators.  The culture of the academy is built around this collaborative imperative; it’s why we have tenure, and go to conferences, and engage in peer review.  Indeed, the world of the academy specifically stands apart from other fields of human endeavor in that it is a joint project of knowledge production for the greater good.  Of course plenty of academics feel competitive about their research, but that’s absolutely the worst angel of our collective nature, not the best, and I think it’s an impulse we should fight against as much as possible.  I object to The Junto’s March Madness exercise because it fosters this shameful spirit of scholarly competition, because it submerges the spirit of collaboration that we should be celebrating, and because it imposes the false clarity of the sports metaphor on a fundamentally messy business.

I get the appeal of doing a “March Madness” of scholarship.  Clarity, even false clarity, is appealing, for scholars and non-scholars alike.  For all those historians out there who love both sports and scholarship, it must be deeply entertaining to experiment with mixing the two worlds in this way.  But I became a scholar rather than a businessman because I didn’t want my world to be driven by relentless competition all the time.  I became a scholar rather than a lawyer because I didn’t want my life to be a series of zero-sum contests with only winners and losers.  For those of us who went into the academy to get away from the Malthusian struggle and oppressive dichotomies of the world of sports, this “March Madness” represents an unwelcome intrusion of an inappropriate metaphor into our beloved community.  I still like The Junto, I just can’t read it in March.