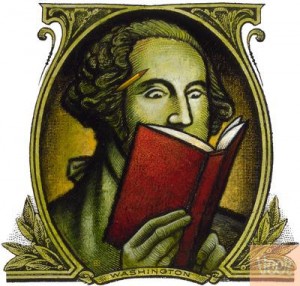 That pencil probably didn’t get much use.

Back in January, I had the opportunity to tour the gorgeous new Fred W. Smith National Library at Mt. Vernon, as part of a reception that they hosted for SHEAR.  It’s truly a gorgeous facility, with lots of resources to support scholars interested in studying “George Washington, Colonial America, and the Revolutionary Era.”  One of their initiatives is the laborious (and mind-numbingly expensive) reconstruction of Washington’s personal library.  Where possible, they are trying to get the actual books owned by Washington; where that is impossible, they are attempting to acquire another copy of the same edition of the same work.  When they’re done, visitors will be able to sit in a (heavily surveilled) room surrounded by the same books that surrounded Washington when he was at home.

I have to confess that I didn’t and I don’t totally understand the point of this undertaking.  The catalog of Washington’s library is widely available, as are most of the books that were in it, at least in digital editions.  Scholars looking to understand Washington’s intellectual intake would scarcely need to sit in that little heavily-surveiled room in Virginia, especially because by all accounts Washington wasn’t much of a note-taker, so it’s not like there’s much marginalia in his own hand.  Sure, I had an emotional response to being in that room and seeing those books, but it seems like an awful lot of money (and at least for other people a long way to travel) to get a little frisson.  And the more cynical side of me is inclined to regard it as just another exercise in founding fathers fetishism, in which a few extremely rich people spend ungodly amounts of money to further sanctify the already sanctified, when that money could be used more efficiently and effectively elsewhere.

And now this seems to be a trend.  This week the Free Lance-Star ran an article describing a similar, if less ambitious, project at Montpelier, James Madison’s plantation in Orange County.  Many of Madison’s books were destroyed in a late-19th century fire in Charlottesville, so the collection can never be as complete as Washington’s potentially can, and also, the books seem to be largely intended to decorate the house, not as a resource for scholars.  Again, it seems like a lot of money to spend for a little added reverence; a guide quoted in the article described her encounter with Madison’s books in a familiar way, “You almost feel as if Madison is there.”

So if two data points make a trend, we have a trend.  A trend that leaves me wondering what is accomplished by reuniting the books of dead presidents?  What useful social and political role does it play?  Is the purpose emotional, or is there an intellectual purpose to the project that I’m missing that justifies the enormous use of limited scholarly resources?