A Month on my RSS Drip 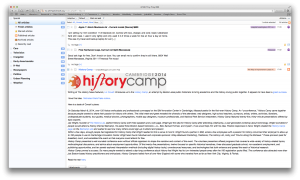 As part of the Domain of One’s Own Faculty Initiative this spring, I began to explore the world of RSS feeds.  Perhaps my favorite part of the DoOOFI was its focus on managing incoming flows of digital information.  The immersive sense of information overload was always the hardest part of living a digitally-engaged scholarly life for me, and in our group we discussed lots of technological and cognitive strategies for managing that information flow to make it useful rather than overwhelming.  As a part of this discussion, I installed Tiny Tiny RSS, an open source RSS reader, on a partition of my domain.  I’ve been using TTRSS for about a month now, and I have some observations about RSS as a technology for managing your digital life.

I have found the utility of RSS completely depends on the feed you’re subscribing to.  Quantity really matters.  I initially tried subscribing to mass-market media feeds like the Washington Post and NPR, figuring that it would be easier to read their content in TTRSS than to visit their websites individually.  Those feeds were completely overwhelming; so much came in on them that I quickly found that I couldn’t bring myself to even open them.  It’s a ton of information, without the navigation tools and context clues that make that flood relatively manageable on their native sites.  In general, the feeds I have found most useful have been those who adopt a less-is-more attitude towards posting, for example, my favorite Fredericksburg weather blogger.

The feed’s degree of customization also matters.  Sites that just offer a firehouse of their posts (like the mass media outlets I just mentioned; also, some of the more prolific bloggers I have subscribed to) means that the work of separating the wheat from the chaff still falls on my shoulders.  I just do that work within TTRSS rather than out on the broader web.  But sites that offer subfeeds, or even better, allow you to build feeds out of custom search parameters, are great to subscribe to.  Such sites allow your set-it-and-forget-it search parameters to do the work for you.  The best example of this is Craigslist, which I think works better with TTRSS than just about any other site.  Craigslist will allow you to build a custom RSS feed out of any search, so if you’re looking for a deal on, say, a new laptop, you can have all ads for laptops with your specifications sent directly to your reader.  That capability saves me a ton of time, work, and distraction.

I thought TTRSS was going to help me with the production of a Digital Commonplace Book, by automating the collection of interesting articles, along with my commentary, onto a special subsection of my blog.  I borrowed this idea from Jim Groom, who has a great blog post about how to set up this trick piece of automation.  But I’ve found that the sites I most often want to save items from are precisely the kind of overwhelming firehose sites that don’t work well as RSS feeds.  So I haven’t been using the capability much, although I will leave it in place to see if it develops.

I have found this iOS app, which connects to my TTRSS installation and presents my feeds in a relatively iOS-friendly format, has really enhanced my use of RSS.  It’s nice to be able to use down moments when I’m mobile to catch up on posts.  The app is a little rough around the edges, much like the open-source TTRSS itself, but it works well enough for those casual moments.

In conclusion, I have partially integrated RSS into my daily digital consumption patterns.  It works extremely well for certain categories of things, because it allows the automation of information sorting tasks.  But where the feeding sites don’t offer that kind of customization and automation, RSS’s tendency to strip context actually makes it harder to use than simple web surfing.