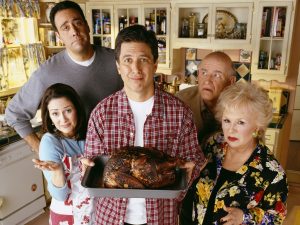 He’s bad at his one fundamental job, but for some reason we love him anyway?!?!??

Lots and lots of friends and acquaintances have been sharing and celebrating Louis CK’s endorsement of Hillary Clinton on Conan last night.  While I agree with CK’s fundamental endorsement … Clinton should be president, and she should be president because of her own unique and exceptional qualification, not just because she isn’t Donald Trump.  On that front, CK and I could not agree more.  I just wish he could have made his endorsement without falling back on the old, tired, worn-out “bumbling-dad” cliche that has been a staple of commercial culture since the 1940s, and which has dominated pop cultural portrayals of fatherhood since the 1980s.  It’s so, so tiresome.

I’d recommend that you watch the entire clip …

… but this is the critical interchange:

It’s not about the first woman, it’s about the first mom … Because a mother, she’s got it.  A mother just does it.  She feeds you and teaches you.  She protects you.  She takes care of shit.  A father, we’ve had 240 years of fathers.  Father after father, bald father, fat father, every kind of father, and fathers are OK … A great father can give his kid 40% of his needs, top out at 40% … and that’s optimistic.  Any mother, just a fucking mother, like just a not even trying mother, 200% … mothers do too much … like they just, they just keep ….

This passage just drives me crazy.  First, it’s lazy, lazy comedy.  The whole dads-are-lovable-incompetents-who-are-barely-tolerated-by-superhero-moms thing is so old, so played out—such a hack sitcom writer cliche, such a trite Bounty Fabric Softener advertising gag—that it doesn’t even count as smart social commentary, let alone comedy.  What makes it worse is, I expect better from Louis CK.  So much of his comedy is about being a deeply competent parent, about the day-to-day hilarity and indignity of actually meeting a child’s needs.  Not only is this joke lame, it goes against his entire comic persona, which is much smarter and more thoughtful than this.

Also, it’s not true.  I know (and I’m sure you do too) lots of male parents who are effectively meeting their children’s needs in partnership with a female parent, by themselves as single parents, or in partnership with another male parent.  Somehow, I don’t think those kids are maxing out at getting 40% of their needs met.  Also, the idea that even “just a not even trying mother” is somehow magically meeting 200% of their children’s needs is belied be the metro section reporting of any given newspaper on any day.  I mean, come on.  And that’s not even getting to the question of whether any parent ever meets 100% of their children’s needs.  If so, I haven’t met them, and also, I would seriously question whether that’s the standard that we want to impose on parents.

More insidiously, the old trite trope of the bumbling father is a sickly sweet piece of candy-coated sexism.  It posits a cultural agreement that since dads can’t meet kids’ needs, moms must.  It insidiously reinforces women’s double burden by making it the subject of lighthearted comedy.  Men are lovably bad parents, women are bemusedly competent parents, so women should take on the responsibility for parenting.  It’s that old tired sexist assertion, that women belong in the domestic space, caring for their husbands and raising their children, dressed up as a compliment about women’s superior parenting skills.  The fact that Louis CK, who is obvious a sincere and thoughtful Clinton supporter, can’t come up with a rationale for her presidency that isn’t also a backhanded argument for keeping women out of public roles like the presidency, is deeply troubling.

Finally, I think the analogy between parenthood (regardless of gender) and being president is flawed and misleading.  It’s like the businessman-as-president argument.  It sounds good in a speech or an ad, but if you really think about it, no one really wants a president to run the government like a profit-seeking business.  It’s the same with this argument that somehow being a good parent would make you a good president.  To my mind, the skills required to be a good president is the ability to imagine a better society, and the ability to make that vision into reality in the context of political reality (both things Clinton is good at, IMHO).  The skill required to be a good parent is the ability to teach a novice human being how to live happily and effectively within society as it is currently constituted.  Sure, we all want our kids to be dreamers and to change the world, but the parent’s fundamental task is first to teach them about that world so they actually inhabit it.  Those are two fundamentally different tasks.  A person might be good at both of them, but there is no necessary connection between them.

Ultimately, this clip just proves something that I have thought for a long time: late-night comedy shows are fundamentally boring and unfunny.  Seriously, I have never gotten it.  I find a lot of things funny, but Conan and his ilk have always left me cold.  Why do people even watch them?  Maybe someone can explain it to me in the comments?