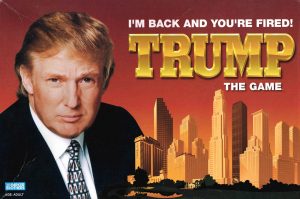 I bet he even loses when he’s playing this game with Barron.

Donald Trump is many things, most of them terrible.  (Seriously, has there ever been a human being with fewer redeeming qualities?  And I’m someone who is usually pretty pollyannaish about seeing the best in people.)  One of his prominent characteristics is deep and profound incompetence.  The man has basically fucked up everything he has ever touched.  His business ventures are a mess, which have only ever been saved by lucky intervention.  He has no attention span, can’t see a project through to completion, and does not appear to learn from his mistakes.  His real estate empire is a cobbled-together mess, glued together with tax dodges, shady dealings, and multiple bankruptcies.  His branding business is small-time and absurd.  The one thing he has proved good at in the twenty-first century, bullying people on TV, has crumbled to dust as networks and sponsors have run screaming.  He has left a trail of failed marriages and hollow interpersonal relationships behind him, and his children (at least those who have taken a public role in the past few years) seem as empty and miserable as he is.  In his perpetually infantile self-involvement, he has developed a reverse Midas touch.  Everything he touches turns reliably to shit.  (The fact that he has gotten as far as he has, anyway, is a testament to the overwhelming power of dynastic, inherited wealth in the United States.)

This fundamental Trumpian truth gives me both hope and despair.  First the hope.  My reading of the second Bush presidency is that the American public didn’t broadly turn against him until 2005, around the time of Hurricane Katrina, when his administration’s deep disinterest in competent administration became brutally apparent.  I don’t think a broad swath of the American electorate ever had a particularly deep objection to Bush’s Bible-banging, trickle-down, neoliberal politics, as loathsome as they were to me and mine.  Bush’s policy positions, and the actions he took to achieve them, were divisive and destructive for Americans, Iraqis, and pretty much the rest of the world, too.  But that didn’t appear to bother most American voters, until it became clear that the Bush administration was seriously amateur hour, an ideological gong show that literally couldn’t get out of its own way.  Only when Katrina revealed that incompetence in stunning technicolor did the broader American electorate begin to notice it in the administration’s other areas of endeavor.  But when they did wake it up it, they turned against the Bushies with a vengeance, delivering solid Democratic majorities in 2006 and 2008.

Trump is doing us all the favor of revealing his incompetence in office right off the bat.  It’s not even two weeks after the election, and his transition team has already been through major shake-ups.  They can’t get simple documents signed in time, they can’t find competent people to staff key positions, and they are making politically destructive choices left and right.  A narrative is already building that Trump is too distracted and disinterested to construct a basically functional administration.  It is looking like we won’t have to wait for another Katrina for the Trump administrations’s basic incompetence to be revealed; we may not even have to wait for inauguration. If the experience of the Bush years holds, the efficiently-distributed minority of American voters who keep putting these clowns in office may be inclined to turn against Trump sooner rather than later, not because they find his odious policies and political positions objectionable (which still BOGGLES THE MIND), but because they are fundamentally turned off by leaders who can’t get their shit together to handle the basics.

That’s the cause for hope.  Enough American voters might be fine with a racist, misogynistic, militaristic ignoramus, but they will lose patience when he has trouble keeping the lights on in the White House.  The cause for despair is that, well, he might have trouble keeping the lights on in the White House.  I remain confident that his incompetence will ultimately be a political liability, but in the meantime, it will be incredibly destructive of our national economy, our national security, and most of all our national community.  I think Trump will ultimately tank himself the way he always does, through his sheer inability to accomplish anything, but the problem is, we’re all going to be caught in the crossfire in the meantime.  It will not be a pretty sight.