Monuments and Artifacts Are Not the Same Thing; Or, Why Fredericksburg Shouldn’t Remove its “Slave Auction Block.” 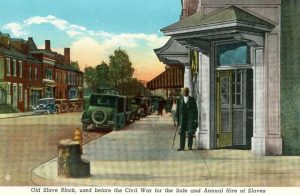 A postcard of Fredericksburg’s “Slave Auction Block” from 1920s; on the back it reads: “In the days before the Civil War it was used for the sale and annual hire of slaves. Albert Crutchfield, shown in the picture, was sold from the block about 1859, at which time he was a boy about fifteen years old.”

Recently, a change.org petition has been circulating in Fredericksburg to remove the “Slave Auction Block” from the corner of William and Charles Streets.  I get why.  We’re in a moment, as my friend James Dator put it, of “anti-racist iconoclasm.”  While we’re sweeping away confederate monuments, why not sweep away all pedestal-shaped artifacts of Virginia’s explicitly white supremacist past.  But this movement confuses monuments with artifacts, and seeks to remove an object that reveals historical truth rather than one that produces historical myth.

The Confederate monuments that are coming down around the south … New Orleans, Charlottesville, Durham, Baltimore, Lexington, Gainesville, and hopefully more … were all products of a postwar moment of historical forgetting.  Mostly erected in the 1910s and the 1920s, or else in the 1950s and 1960s, these monuments were literally mass-produced in the North to create a Southern civic landscape that celebrated the Civil War as a moment of shared white sacrifice rather than as a moment of national struggle over the possibilities of black liberation and a truly multiracial republic.  They were not erected to remember the Civil War, or anything that came before it; they were erected to celebrate and cement the endurance of white supremacy notwithstanding the Civil War.  They are not artifacts from Virginia’s past, they are monuments to a deeply fictionalized and politicized version of its past.  I’m far from the only one to point this out; New Orleans mayor Mitch Landrieu has made it more eloquently than just about anyone. 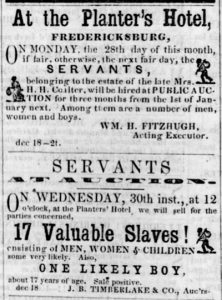 The “Slave Auction Block” is not a monument; it’s an artifact.  As far as we know, it’s an actual relic of Fredericksburg’s antebellum past.  There is debate about the authenticity of the actual block of stone embedded in the sidewalk.  However, enslaved people were undoubtedly auctioned at that site … see the newspaper advertisements just to the left … and there is circumstantial evidence that they were sold from an auction block … see the 1920s-era postcard at the top of this post, or else check out the first chapter of Isaac Williams’s 1885 memoir Sunshine and Shadow of Slave Life.  But I think the question of whether or not people were sold from that actual hunk of stone, or from some other platform, is actually profoundly unimportant compared to the fact that human beings were sold for money at that spot.

As Landrieu and so many others have said, we should tear down monuments to a false past that in the present day serve the odious political purpose of white supremacy.  But we should not be in the business of removing historical artifacts, actual objects left over from the past that tell its story.  We especially should not remove the “Slave Auction Block.”  It needs to remain because it is a reminder that at its heart, slavery was a system that put a price on a human being.  That is one of its deepest truths and its most profound horrors, and people need to understand that.  Otherwise, it’s too easy to romanticize the reality of slavery. The auction block reveals the truth of our past, unlike, say, a street name that valorizes Jefferson Davis as a hero, which obscures the truth of our past.
I think the “Slave Auction Block” should be fenced off out of respect for those that suffered there.  It’s painful to see people climbing on it to take a picture, or letting their kids play on it.  It also needs to be better contextualized and explained so we understand the reduction of people to prices that happened there.  But we cannot let ourselves off that easily about the true horror of slavery.  In the same way that the presence of Confederate monuments allows us to maintain the false notion that the Confederacy was about something other than the maintenance of white supremacy, the removal of the “Slave Auction Block” would allow us to pretend that slavery was somehow less horrifying than it really and truly was.
Keep the “Slave Auction Block.”  Take Jefferson Davis’s name off the highway.  They are both acts of historical truth-telling.
Category: Blog /