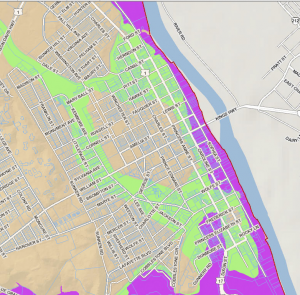 In the wake of Hurricane Harvey (and in anticipation of Hurricane Irma), the topic of the National Flood Insurance Program has popped up on pundits’ radar once again.  As usual, the question of public subsidy for flood risk is told as a morality tale, one in which greedy developers and overprivileged second home owners disregard the moral hazard of their decisions and pass the buck to the public purse.  But reality of flood insurance is considerably more complex than this parable of greed and shortsightedness.  The NFIP not only covers a vast number of ordinary everyday homeowners, it also covers a vast number of historic properties.  Defunding the NFIP would be a direct attack on the project of preserving the historic building fabric of the United States.

First, a brief history of the NFIP.  It was created by the Federal Government in 1968 to provide federally administered and subsidized flood insurance to communities vulnerable to flooding.  Prior to the 1950s, flood damage was generally covered by homeowner’ insurance, but in the 1950s and 1960s, commercial insurance began to exclude flood damage because it could get really expensive really quickly.  The NFIP was a classic Great Society solution; it subsidized the cost of coverage for vulnerable propertyowners, while providing federally managed incentives to those propertyowners to take flood damage mitigation measures, like removing mechanical equipment from basements or elevating houses on stilts.  The arrival of NFIP basically killed the market for private flood insurance; if American propertyowners want flood coverage, the NFIP is the only game in town.

Over time, the premiums for flood insurance acquired through NFIP did not keep pace with the growing scale of claims, meaning that flood insurance became increasingly subsidized by the Federal Government.  Pressure for reform led to the Biggert-Waters Act, passed in July 2012, which raised premiums, especially on second homes, businesses, and on frequently flooded properties.  The idea was to make propertyowners bear something closer to the true cost of insurance to disincentive them from build or rebuilding in flood-prone areas.

Of course, propertyowners, home builders, and real estate agents are politically powerful in the United States, particularly the wealthy ones the build, sell, and own oceanfront property.  After Hurricane Sandy, which followed the passage of Biggert-Waters by a mere three months, Congress faced enormous blowback for raising costs on vulnerable flood-prone homeowners.  The result was the Homeowner Flood Insurance Affordability Act of 2014, which delayed the price increases called for in Biggert-Waters.  As a result, the NFIP remains in the same financially perilous, heavily subsidized status quo that obtained for much of the late twentieth century.

The state of flood insurance and the cost of rebuilding flood-prone buildings are obviously once again on everybody’s mind in the wake of Harvey.  This has led to a small cottage industry of journalists and pundits calling for a renewed reform attempt along the line of Biggert-Waters (see examples from NY Mag and The Week; there are tons more if you care to google).  The villains in these pieces … the Americans who are receiving an undeserved subsidy for their flood risk … are almost invariably either rich people with palatial second homes on the beach, or greedy developers who build in flood plains to make a quick buck without thought to the long-term consequences of such development.  And I get why advocates for “reform” focus on these examples, because in these cases the Federal Government is subsidizing the luxury lifestyles o the rich on the one hand, and the shortsighted, destructive, profit-oriented decisions of big real estate corporations on the other.  It makes for an effective argument. 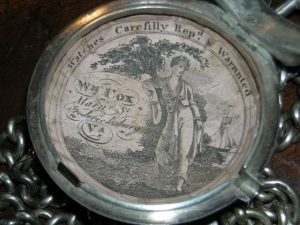 But my experience with the NFIP is different.  Just before the Homeowner Flood Insurance Affordability Act of 2014, my husband and I purchased an 1839 silversmith and clockmaker’s shop in Fredericksburg’s historic downtown, in order to undertake an historically sensitive renovation to convert it into a spa.  The shocking cost of flood insurance post-Biggert-Waters almost killed the deal; it was only some creative adaptation of the building’s mechanical systems (precisely the kind of flood-resistance innovation the NFIP was designed to incentivize!) that made the numbers work.

Lots of similarly significant historic buildings are situated in flood-prone areas.  Before the commercialization of the railroad in the 1830s and 1840s, most commerce traveled by water, and waterwheels powered most mechanized industry.  As a result, retail stores, warehouses, workshops, manufactories, and even well-situated farms and homes were built as close to rivers, streams, and shorelines as possible.  These were places that were undoubtedly flood prone even in the eighteenth and nineteenth centuries, but the advantages of being near the water outweighed the risk of the occasional flood.  As a result, a significant percentage of America’s extant historic fabric is located in areas that require NFIP insurance. 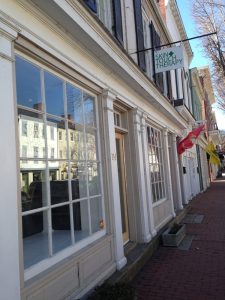 Our old silversmith’s shop in the context of the city’s historic fabric.

I bring up my experience because the social and cultural value of having a meaningful public subsidy for flood insurance looks different when the test case is a largely intact eighteenth- and nineteenth-century commercial downtown like Fredericksburg’s, rather than McMansions built in a Houston floodplain or monstrous weekend castles on the Jersey shore.  Without flood insurance that is meaningfully publically subsidized, these historic structures will become unaffordable for anyone to buy, own, renovate, and preserve.  They will either become the exclusive province of the wealthy, or, more likely, they will fall into disuse and neglect.  The best way to preserve historic structures is to ensure that they are inhabited, maintained, restored, and sensitively adapted for modern use by those who love them.  The quickest way to ensure that they disappear is to make them empty by making them unaffordable.  One critical component to making sure they remain affordable is to ensure that the risk inherent in their historic proximity to water is made manageable and affordable.

I’m not arguing for a public subsidy of irresponsible developers or wealthy vacation home owners.  I think there is a reasonable case that the costs of the business strategies of the one, and the personal luxuries of the other, should largely be borne by the corporations and families involved.  But I am arguing that in our natural-disaster-fueled rush to reform the NFIP, we need to remain aware that greed and luxury are not the only reasons that structures exist in flood zones.  Many are there because of the imperatives of history, and if we care about preserving that history, we need to make sure that we don’t throw it out with the flood water.