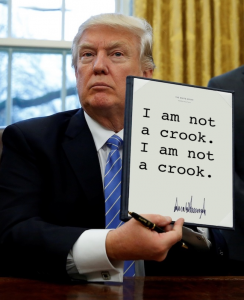 Also not a crook.

Recently, I stumbled across Hunter S. Thompson’s obituary for Richard Nixon, originally published in Rolling Stone on June 16, 1994.  It’s worth reading in its entirety, but I just have to pull out and share some of my favorite parts of it.  It is also speaks hauntingly to the moment we find ourselves in today.  Trump’s not Nixon, but oh man, does Trump ever rhyme with Nixon.

Thompson had a way with words.  His journalistic ethics, which eschewed the standards of “Objective Journalism” (he liked to capitalize it for Maximum Impact) as false and misleading and embraced the use of the first person as critical to truth-telling, freed him up to say what he really thought about public figures like Nixon.  But his approach to journalism wouldn’t have been nearly as effective without his unbelievable skill at invective.

Let there be no mistake in the history books about that. Richard Nixon was an evil man — evil in a way that only those who believe in the physical reality of the Devil can understand it. He was utterly without ethics or morals or any bedrock sense of decency. Nobody trusted him — except maybe the Stalinist Chinese, and honest historians will remember him mainly as a rat who kept scrambling to get back on the ship.

He hated a lot of things about Nixon.  Some of the things he hated about Nixon really remind me of Trump: 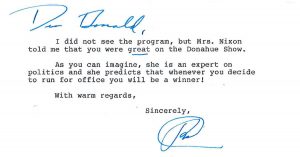 When [Nixon] arrived in the White House as VP at the age of 40, he was a smart young man on the rise — a hubris-crazed monster from the bowels of the American dream with a heart full of hate and an overweening lust to be President.

[Nixon] was not only a crook but a fool. Two years after he quit, he told a TV journalist that “if the president does it, it can’t be illegal.”

Shit. Not even Spiro Agnew was that dumb. He was a flat-out, knee-crawling thug with the morals of a weasel on speed. But he was Nixon’s vice president for five years, and he only resigned when he was caught red-handed taking cash bribes across his desk in the White House.

He had some prescient words of warning for journalists, and how figures like Nixon and Trump hit them right in their Achilles’ heel.

Some people will say that words like scum and rotten are wrong for Objective Journalism — which is true, but they miss the point. It was the built-in blind spots of the Objective rules and dogma that allowed Nixon to slither into the White House in the first place. He looked so good on paper that you could almost vote for him sight unseen. He seemed so all-American, so much like Horatio Alger, that he was able to slip through the cracks of Objective Journalism. You had to get Subjective to see Nixon clearly, and the shock of recognition was often painful.

He also had some lessons for historians, particularly those who would reevaluate Nixon’s career and make it look maybe not so bad in hindsight:

Kissinger was only one of the many historians who suddenly came to see Nixon as more than the sum of his many squalid parts. He seemed to be saying that History will not have to absolve Nixon, because he has already done it himself in a massive act of will and crazed arrogance that already ranks him supreme, along with other Nietzschean supermen like Hitler, Jesus, Bismarck and the Emperor Hirohito. These revisionists have catapulted Nixon to the status of an American Caesar, claiming that when the definitive history of the 20th century is written, no other president will come close to Nixon in stature. “He will dwarf FDR and Truman,” according to one scholar from Duke University.

It was all gibberish, of course. Nixon was no more a Saint than he was a Great President. He was more like Sammy Glick than Winston Churchill. He was a cheap crook and a merciless war criminal who bombed more people to death in Laos and Cambodia than the U.S. Army lost in all of World War II, and he denied it to the day of his death. When students at Kent State University, in Ohio, protested the bombing, he connived to have them attacked and slain by troops from the National Guard.

And the he ends with this:

Nixon’s spirit will be with us for the rest of our lives — whether you’re me or Bill Clinton or you or Kurt Cobain or Bishop Tutu or Keith Richards or Amy Fisher or Boris Yeltsin’s daughter or your fiancee’s 16-year-old beer-drunk brother with his braided goatee and his whole life like a thundercloud out in front of him. This is not a generational thing. You don’t even have to know who Richard Nixon was to be a victim of his ugly, Nazi spirit.

He has poisoned our water forever. Nixon will be remembered as a classic case of a smart man shitting in his own nest. But he also shit in our nests, and that was the crime that history will burn on his memory like a brand. By disgracing and degrading the Presidency of the United States, by fleeing the White House like a diseased cur, Richard Nixon broke the heart of the American Dream.

Apart from the string mid-90s cultural references (hello, Boris Yeltsin and Amy Fisher), you could write this today.  If you had the chutzpah and the chops.