An Apocalypse of Narcissists 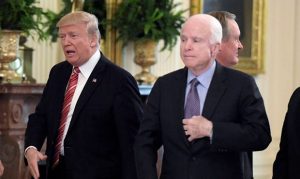 John McCain’s triumphal return to DC and impassioned Senatorial plea for mature legislating is being played as a study of contrasts in Trump’s Washington.  Most coverage has treated it as a clash between two poles of the Republican party: the craven, heartless dealmaking and win-seeking of Trump and McConnell, vs. the impassioned heroism of McCain.  Except it’s not a study in contrasts at all.  John McCain and Donald Trump are the same basic person and the same basic politician, except one has a slightly better developed dorsolateral prefrontal cortex and also does a better job of listening to his lawyers and his PR handlers.  It’s not a clash of extremes, it’s an apocalypse of narcissists.

I’ve never really understood the Cult of McCain.  (To be fair, I don’t think I’m particularly alone in this … I think most of America sees through his schtick … it really only plays persuasively among a certain class of DC insiders and those who aspire to that dubious status.)  Ever since the run-up to 2008, he has largely been portrayed as an upstanding man of principle, a man heroically committed to public service in many forms, and a man willing to stand up to his party and speak truth to power.  The thing is, it has never been very hard to see through his Maverick act.  He’s basically a garden-variety early-21st-century conservative Republican from a red state who has chosen a handful of issues on which to deviate briefly from the party norm in order to establish his heroic loner credentials.

So what drives McCain’s Maverick act?  Partly political calculation, but it has always been very apparent to me that it is also by a desire to be universally admired as a heroic public servant.  In other words,  it’s McCain’s deep emotional neediness rather than policy that dictates whether he’s going to vote in lockstep or not.  Deep down, he’s angry, self-involved, impulsive (remember Sarah Palin), and driven by an emotionally stunted desire for praise.  Politically, he takes the occasional populist stand, but he then routinely uses his position of enormous privilege to shit on the vast majority of Americans less fortunate than him.

If you doubt any of this, just look at what he did today.  He flew back to DC, while very sick and in the care of incredibly expensive medical specialists whose services will be paid for collectively through his government-provided insurance, to vote to begin debate on a bill that would take precisely that opportunity away from thirty million less fortunate Americans.  And he did so in order to have a moment in the Senate spotlight, where he could both present himself and be hailed as a hero for his sacrifice.  And he then delivered a speech that was a passionate defense of regular order and mature lawmaking in the Senate, just after having a cast a vote for precisely the opposite process.  In other words, he’s desperate for praise, likes to see himself as a heroic savior, and is guilty of towering and blindingly obvious hypocrisy on matters of both substance and process.

Does that sound like anyone you know?
Category: Blog /