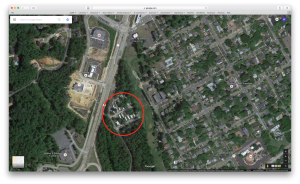 Fredericksburg Trailer Park circled in red. Note how isolated it is from the rest of the city, by a power line and an arterial roadway. (Click to enlarge.)

A recurring concern of this blog is Fredericksburg’s problems with affordable housing, and particularly how the civic culture of our small city shapes its openness to broadly diverse residents.  Since I last addressed the subject last winter, little has changed; indeed, the city has recently recommended rejection of a new downtown development that would add 110 units of relatively affordable housing (the key term here being “relatively”).*  In this morning’s Free Lance-Star, I found a lovely piece by Lindley Estes about the fate of the Fredericksburg Trailer Park and its residents, which speaks directly to the real and immediate human costs of Fredericksburg’s affordability crisis.

You should go and read the whole thing, but briefly, this is the story: the owner of the Fredericksburg Trailer Park, the last remaining trailer park within city limits, filed for bankruptcy in December 2015.  The settlement of the case has resulted in the property being sold to a large local developer, who is already in the process of building a commercial and residential neighborhood across the street from the trailer park.  As Estes delicately puts it, this new development hosts “Chipotle and Starbucks, places people in the trailer park don’t frequent.”  The developer’s plans for the trailer park are unclear (and to be fair, they don’t seem to be rushing residents out immediately), but given the corporate name they have used to purchase the property, it seems likely that they intend to extend their existing project across the road.

In the meantime, the residents of the trailer park are caught in a bind.  The sale of the property nullifies their ground lease, forcing them to move.  If they own their own trailers, they can take them along, except that many of the trailers are too old to be moved, which means that they will lose them without any compensation.  Many of them have lived there for decades (some since the 1960s!), and many more are on fixed incomes that necessitate extremely affordable housing.  At least two of the residents profiled in Estes’s piece moved there from downtown because of the lack of affordable housing there.  It seems clear from Estes’s reporting that many of them don’t know where they will go next, and that pretty much any realistic solution to their affordable housing needs will involve them moving far outside city limits.  None of them seemed enthusiastic about making the move.

Congrats to Estes and the Free Lance-Star for publishing such a compelling piece.

* I am agnostic about this development and this recommendation.  The goals of providing more housing units at diverse price points and of adding more residential density to Lafayette Boulevard are good ones, but there does seem to be significant environmental concerns with this project as proposed, which warrant reexamination.