Capitalism is an Empty Signifier 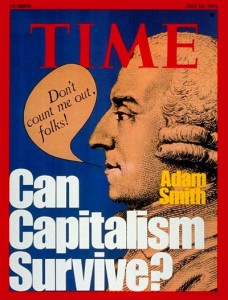 Yes, definitely, assuming anyone can tell you what capitalism actually is.

Back in January, I posted about a project that my Cultural History of Capitalism seminar was undertaking this semester.  Students in the class had to go out and interview three people about how they understood both the meaning of capitalism as well the history of capitalism, and then they had to write a reflection post on their conclusions about popular meanings and histories of capitalism, and how those popular understandings match up with the scholarly literature on the subject.  The project is done, and it has turned out to be an interesting and revealing, if not particularly surprising, exercise in muddiness.  The class’s interviewees often had strong feelings about capitalism, which showed a good deal of variation from strongly positive to strongly negative to deeply ambivalent.  But when we pushed harder, the interviewees generally had a difficult time saying exactly what capitalism was, and an even harder time tracing its history.  People knew it had something to do with “markets,” and often “freedom,” and that it came from England, and that Adam Smith was an important guy.  Beyond that, most of the interviewees demurred.

These findings provide evidence what I have thought for a long time: that in contemporary American culture, the term “capitalism” is something of an empty signifier.  It exists to contain our feelings about our relationship with the economy and with each other.  If we are dissatisfied with those relationships, “capitalism” is an immoral, or at least an amoral, set of social relationships.  If we are generally satisfied, then “capitalism” is the logical, natural, and inevitable way of structuring society.  If we feel both ways, then “capitalism” becomes an expansive, protean term that stretches to contain our ambivalence.  It’s hard to nail down exactly what “capitalism” is from these interviews, because the answer to that question is fundamentally social and emotional.  Go ahead and browse around on our project’s website and see if you don’t come to the same conclusion.