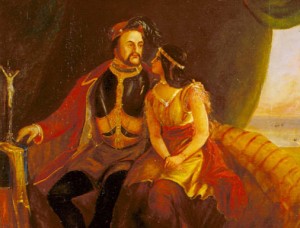 This shining example of traditional marriage is why the the gays can’t have any.

David Cohen in Slate has brought word of what he calls “The Worst Argument Ever Made Against Gay Marriage,” made last week before the Fourth Circuit in Richmond.  The occasion was the state’s appeal of the Eastern District of Virginia’s decision in Bostic v. Schaefer that the Commonwealth’s constitutional ban on gay marriage is unconstitutional.  The attorney defending the ban, David Oakley, made a brave foray into Virginia history in order to show Virginia’s “traditional” support for opposite-gender marriages.  That’s right, the gays can’t get married in Virginia because of Pocahontas.

The legal “logic” is a bit convoluted here, so bear with me.  At issue was the Supreme Court’s finding of a fundamental right to marry in Loving v. Virginia, a case that is obviously nationally applicable, but which has a special emotional if not legal resonance in the Old Dominion.  Oakley was trying to make the case that the court’s finding in Loving was only meant to unearth a temporarily buried right to interracial marriage, which was an existing tradition in Virginia was that unfortunately temporarily buried by the anti-miscegenation statutes that were at issue.  The example he used to make this case was the 1614 marriage of Pocahontas and John Rolfe.  This reading of Virginia’s history was intended to support a narrow reading of Loving; if its fundamental right to marry only applies to the temporarily restricted category of interracial opposite-sex marriage, then it doesn’t apply to same-gender marriage.

Cohen does an excellent job of demolishing the legal logic of this argument (brief summary: it’s unadulterated nonsense).  He also points out its basic historical problems: you can’t really make constitutional arguments based on events that took place before the Constitution was even dreamed up, and plus, the Virginia colony banned marriages between blacks and whites in 1691.  It was the first colony to do so, so if any place in North America has a tradition of marriage discrimination, it’s Virginia.  So yeah, Oakley was spouting nonsense.

I would hasten to add, though, that this argument fundamentally misunderstands the nature of the relationship between Pocahontas and John Rolfe.  As Camilla Townsend’s 2009 Pocahontas and the Powhatan Dilemma argues, the relationship between the two can best be understood as an attempt by both English imperial boosters and the tidewater Algonquians to incorporate the other into sociopolitical world.  For Rolfe, Pocahontas’s Christianity and “civility” justified England’s mission (in all senses of the term) in Virginia, and Pocahontas, Rolfe’s role as the husband of a favored daughter of the paramount chief Powhatan cemented the English colony’s position as a vassal settlement in the existing tidewater political structure.  For both groups, their marriage was more important for its political and religious symbolism than as an expression of an emotional relationship between two individuals.  In other words, it wasn’t some sort of early modern version of a modern romantic, companionate marriage.  It makes a pretty poor example for anyone trying to make an argument about “traditional” marriage.  If anything, it’s a better example of how the means of marriage are always contingent, which precisely undermines Oakley’s point.

The only part of Cohen’s great essay that I’d quibble with is his contention that this is the worst argument ever made against gay marriage.  Personally, I think South Dakota’s one-way-alley-for-the-garbage-truck argument might take that title.